If a Picture Paints a Thousand Words …..

….. then why can’t I paint you? The world will never know, the you I’ve come to know.

No, don’t worry, I’ve not gone totally mad! I am just thinking about our family photographs and what we do with them. I normally try to remember to write on the back, in soft pencil, the name, dates and details of the person concerned as that will help in the future. How I wish my family had done that with all the pictures I inherited from different relatives!

I have this lovely picture of my great, great, great grandmother, Lydia. (Born Lydia Goll, later to become Lydia Davy and then Lydia Bear.) 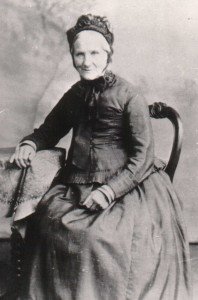 Born in 1812 and married in 1831. She had her first child in 1832, lost her husband in the same year and re-married in 1834. From her second marriage, she added another twelve children to her family, though two died as infants. Her second husband died in 1868 and she went on to live to the very end of the century, laid to rest on the 29th December 1899. Her photograph shows me an elderly lady, but I know a lot more about this face that looks at me from the C19th. I know some of the cottages she lived in, I know that she took in washing till late in her life, she looked after her father in his old age and she even took in some of her husband’s nephews when they had nowhere to live. Today, her descendants have spread all over this world. They live in Canada, Australia, France and all over England, my Mum, her great great granddaughter, still lives in the same village that she called home and that was where I grew up too.

There is no marker to where she was laid to rest, but her genes live on, who needs a memorial, I’m her memorial!

One Response to If a Picture Paints a Thousand Words …..