Gravestones can be one of the most interesting and informative objects that we family historians can find.

Most Churches are lovely to walk around and to feel at ease in, just being in a Church makes me feel peaceful and relaxed. To visit a Church that was used by my ancestors is always a very special event for me. Just thinking that my own family walked up that same pathway and through that same doorway into the same building and worshipped in that space is just mind-blowing. The Font in my local Church has the date 1603 on it and one of my ancestors was baptised in that very Font in 1620. Just think, those numerals were fresh when that event took place! Subsequent family members were baptised in that Font (not me though as I was baptised in the Methodist Chapel) and numerous members of the family have married and been buried in the village before and since.

Funnily enough though, there are very few Memorial Inscriptions (MI’s) to my family in the grave-yard, we were mostly from Agricultural Labouring stock and obviously didn’t spend the few pennies earned in the fields on memorials!

One of the best MIs I have seen was during a transcribing project I helped with in another local Church-Yard. I joined with other members of a local Family History Society and, luckily, I was given an area to “do” and I came across this stone much to my excitement. It was to a Crimean Veteran and his Army career as well as some details of his time in the Police force were noted on his memorial. I duly took down all the information and we decided that this was a good project for the Society to carry out more research on. Some other members and I set about finding as much as we could about this man and what a journey that was. 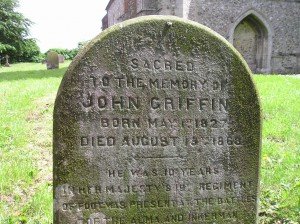 From just one small insignificant stone in a mid-Norfolk grave-yard, we now have the story of this one man from his birth in bastardy, his service record, the details of where he fought and what was going on at those battles, his injuries, his marriage, his joining the Police force (with his signature on the form), his death and his wife’s subsequent marriage. Not only that, but we also found that his mother and her husband emigrated to Australia and we have a lot of information about the family in Australia.

All that stemmed from just one little stone in a Church-Yard in Norfolk.

Next time you are looking around the stones in a grave-yard, keep a good look out, you never know what you will find.

5 Responses to Looking at Gravestones