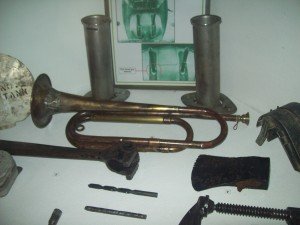 Items found during work at Thorpe Abbotts. Was this part of Glenn Miller’s Orchestra?

American Airfields during WWII.
I have just had a really rewarding couple of weeks! First, I took three American sisters and a family friend of theirs, to lots of places associated with the family history. Nothing unusual in that, except the places were to do with the sisters’ parents. Mum was an English Nurse and was born in Norfolk, Dad was a WWII GI and, having volunteered to drive the bus to the dance, he got the pick of the prettiest Nurse! (Family story!)
I was able to take them to the house where Mum was born, houses where Mum and her family lived, they ate a “Mr Whippy” as they walked along the beach where Mum played as a child and, to the Cathedral where the couple were married. I was able to find newspaper cuttings and references to their father in books. As he was from Texas, he helped arrange a Rodeo in the local city to entertain the locals and I found a lot of information about that event but best of all, I was able to arrange a private visit to the airfield where Dad spent most of his time in England during WWII. Two local men showed us around the airfield and we even got to see the buildings which were used by the Servicemen.
Last Friday, I picked up two sisters who were staying in London and brought them up to Norfolk where I had arranged a private viewing of another of our airfields. (We were known as America’s Aircraft Carrier and Little America during WWII because of all the airfields!) This time, there were even photographs of the ladies’ Dad and he was well known in the area because of his flying record. He flew over 50 missions! There were exhibits from the time and lots of information about the men who served. The ladies had even met some of the men mentioned in the records held in the airfield museum.
If you have a family member who served in East Anglia during WWII, why not take a trip to see where your relative spent his or her time. (Yes, there were American women who served over here too!) The airfields are often now open farm-land, some are totally lost and some have just a few buildings or parts of the runways still in tact but those thousands of service men and women deserve our gratitude and we can honour their memories at the places they knew so well.
This list is not exhaustive by any means but includes some airfields used by the American Airforce during World War II:
Bircham Newton, Bodney, Coltishall, Cromer, Deopham Green, East Wretham, Feltwell, Foulsham,
Great Massingham, Hardwick, Horsham St Faith, Langham, Little Snoring, Marham, Narborough,
North Creake, Old Buckenham, Sculthorpe, Seething, Shipdham, Swanton Morley, Thorpe Abbots
Tibenham, Watton, Wendling, West Raynham.

Some of these places have great claims to fame, Swanton Morley saw the first bombing raid of US aircraft from England and was seen off by the President and the Prime Minister. Jimmy Stewart served in Norfolk and I have been told that the great Glen Miller played his last concert in the County.
Why not come over to England and visit those places in your recent family history too? It doesn’t have to be ancient history to be interesting! 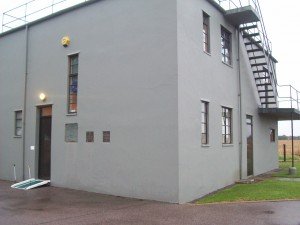 The Control Tower at Thorpe Abbotts

Goose-bumps, tears, smiles, laughter, memories, these last couple of weeks had it all!!!