Who would have thought that just a chance comment in an article on a website could give me hours of researching fun? Well, if you are like me, anything I start to look at, usually ends up meaning that I research the subject till I have enough material for a book!

I have discovered many things which are just too painful to think about, children being put up hot flues, children of four or five being sent up chimneys and the terrible conditions  in which they lived.

Below, I quote from some journals and reports of the time before this terrible practice was finally stopped. It isn’t nice to read but, if you are a serious historian, it is important to know what was REALLY going on during the times of our ancestors. Many of our ancestors would have been involved in this trade, either as sweeps, journeymen or customers!

“One boy, who was put into a flue when it was hot, was almost dead when he was got out, and died very soon afterwards. Another boy, ten years of age, was so badly burned that he was rendered a cripple for life. Another boy came tumbling down and died from the effects of the burning. In another case, a boy who was driven up a flue by his master did not come out again alive. There were two cases in which children had been literally roasted to death. The boys in these cases were not more than five or six years old. In June, 1851, a boy named George Wilson, ten years of age, who bad swept nine chimneys, was suffocated in the tenth, up which he had been forced by his master; and a witness said that the place was so hot that he could not have kept his hand on it for five minutes. ”

“These children were regularly sold. It was proved that one boy, who was terribly burnt, had been sold for a guinea, and another child, eight years of age, who had been sold five times over, was taken before a magistrate at Hull, who exclaimed very justly, “They may talk of slavery, but there is no slavery worse than this.””

“The facts of the case were, that this infant was forced up the chimney on the shoulder of a larger boy, and afterwards violently pulled down again by the leg and dashed against a marble hearth ; his leg was thus broken, and he died a few hours after; on his body and knees were found sores arising from wounds of a much older date.”

Some questions and answers about their living conditions:

“Can you give the Committee any information how these boys are in general treated by their masters; first as to their lodging?—With the exception of the few respectable tradesmen, the rest had no better lodging than the cellars in which the soot was deposited; the boys sleeping on the soot bags.

How were the apprentices of the better class of masters lodged ?— They slept in attics, two or three or more together; and even in their cases they were not washed or cleaned more than once a week.

Did they sleep on beds or on mattresses? -They sometimes were found sleeping on pallets, and in one very respectable situation they had nothing but straw; and that was the case in most instances of the respectable ones.

Had you any information how often they were washed, or if any care was taken that  they should be washed, by those persons who were not considered as respectable masters?—We found that among the less respectable class of chimney sweepers, the boys were taken to the New River of a Sunday morning, in the summer season.

During the winter months, do you know whether any care was taken with, respect to their washing?—We had reason to fear there was not, and which would account for the disorders generated by remaining longer than the week in their filthy garments.

What disorders do you particularly allude to ?—The principal complaint to which they are liable is the cancer, which generally affects them in the scrotum.

Has it not sometimes been known to affect them within the lip, and in the eyes?—Yes ; but the affection in the scrotum is the most general, and by medical men is technically termed the chimney sweepers cancer.” 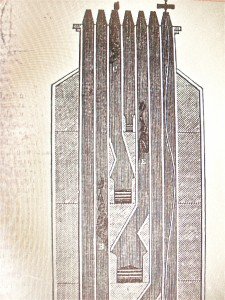 A cross-section of a typical large Victorian house, showing chimney sweeps at work. Some of these flues were only 7 inches square! 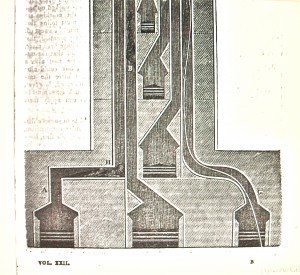 The lower part of the picture above.